First quarter 2010 marks the fourth consecutive quarter in which beachfront sales have shown an increase over the same quarter, prior year. Q1 sales units are up 33% over Q1 2009, with 40 closed sales vs 30 a year ago. Twelve sales were recorded on the Bay during the first quarter, up from 3 sales for the same period in 2009.

Average sales price of beachfront properties declined to its lowest first quarter level since 2002, posting a 24% decrease from first quarter 2009. Highest average first quarter price occurred in 2007, reaching $2,124,397 and impacted by large volume sales in Aria, LeJardin, LeParc, LeRivage, and The Regent. The highest sales recorded in the first quarter of 2010 were in LeJardin, where two closings exceeded $3,000,000 each. Others were generally under $1,500,000 with a substantial number of sales in the older buildings at under $1,000,000.

The highest number of closed sales occurred in the Brittany, with four sales, followed by Lausanne, LaMer and Bay Shore Place with three sales in each building.

Bayside properties also saw average sales price fall for the fifth consecutive quarter. At $368,063 for the first quarter 2010, this represents the lowest average for any quarter since first quarter 2004. It should be noted that there were only 3 sales on the bay during Q1 2009, with one of them being a Charleston Square unit which sold for $1,875,000. During Q1 2010, the number of sales is up while all 12 sales recorded were under $400,000. 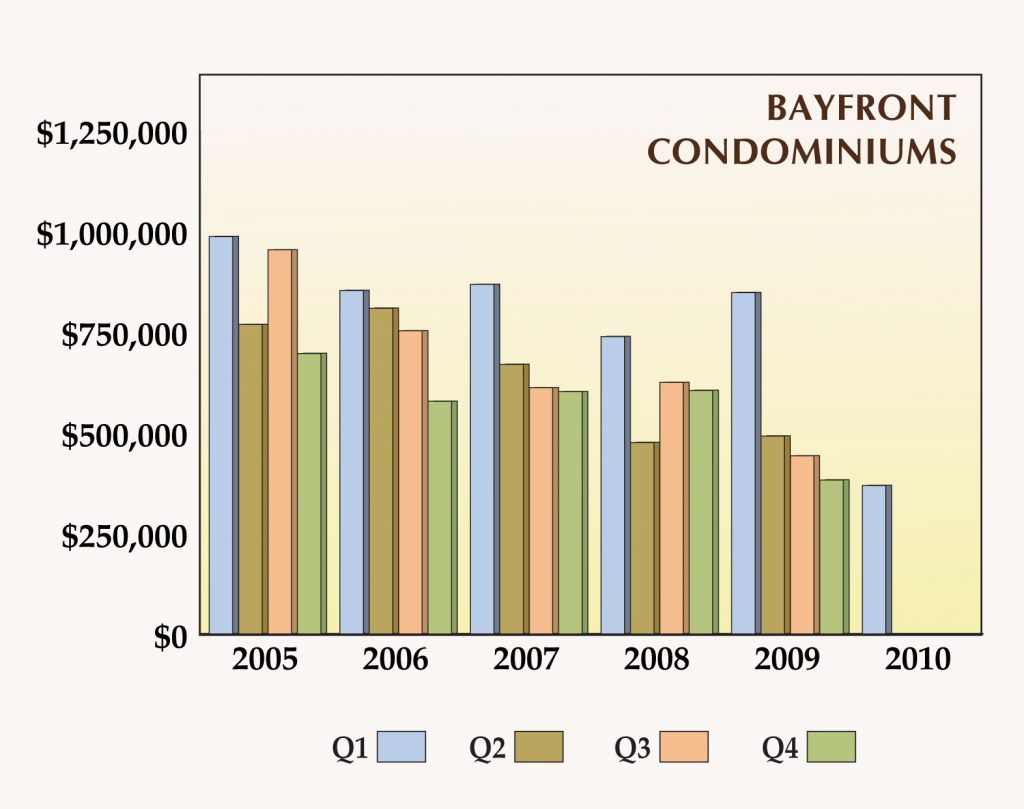 On April 1, 2010 there were 242 properties for sale on the Gulf and 94 on the Bay. This represents a 9% decrease for beachfront properties and a 9% increase in available bayfront units from the beginning of first quarter 2009.

The Demand remains strong for this popular area. First quarter pending sales for the entire condominium market were quite respectable, which should have a positive impact on the market as those transactions close. In addition, the second quarter has historically been a very active sales period, so we expect inventories to continue their decline.

Great buying opportunities abound in this segment as well as others. Dustin Beard can give you detailed information on specific buildings and locations in which you may be considering selling or purchasing.