Enjoy being a part of this friendly community with social events and gatherings, or join in the many activities at the Pelican Marsh Community Center.  Amenities include pool and spa, tennis, fitness, classes, lectures, bridge, book clubs, mahjong. For golfers, an equity or non-equity position in the Pelican Marsh Golf Club, an 18-hole championship course is a great way to improve that handicap. Pelican Marsh also boosts one of the best locations in Naples with three easy access points and a short drive to the beach, dining and world-class shopping.

We're sorry, but we couldn't find MLS # 214068135 in our database. This property may be a new listing or possibly taken off the market. Please check back again.

Closed sales units for the third quarter remained strong despite a slight downturn from third quarter 2009. News of the oil spill during July, August and September was the primary factor in causing a slow down in what had been a robust market during the first two quarters. Properties priced below $250,000 comprised 65% of all units closed in the third quarter, and continued to be the most active segment. Inventory in the category is up 14% over Q3 2009 and only slightly below third quarter 2008.

Closed sales above $1,000,000 continued to strengthen, posting an 8.5% increase over Q3 2009. This represents the strongest third quarter for this segment since 2007. Overall, available supply of units continued to decline with supply at the end of the third quarter down 6% from Q3 2009 and 26% from the same period 2008. 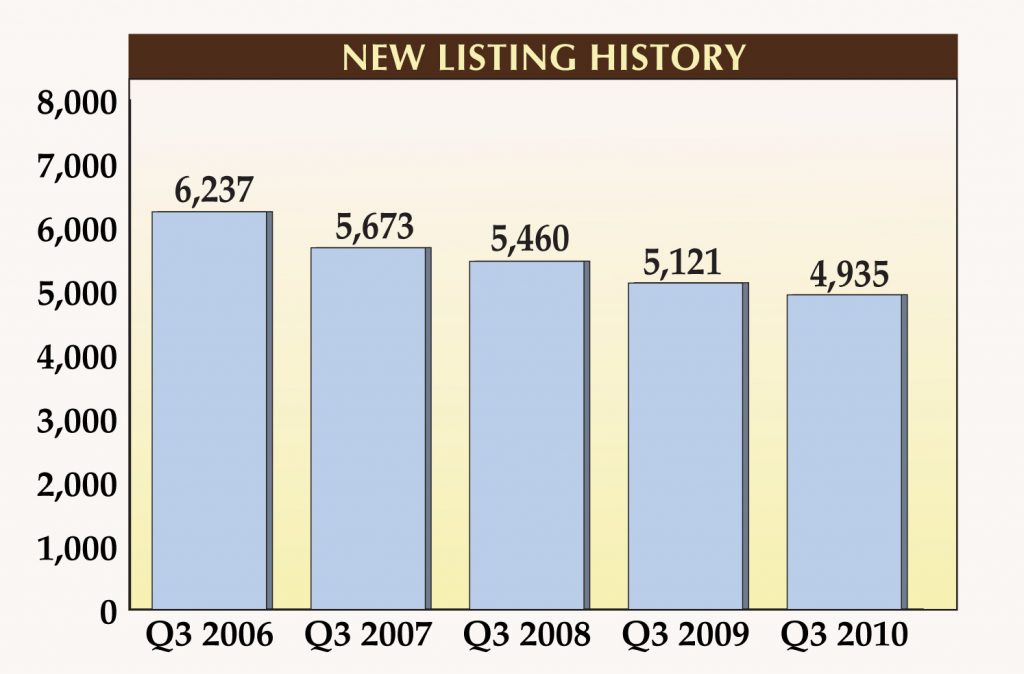 Current supply is at its lowest level for the third quarter since John R. Wood Realtors began tracking inventory levels in 2007. Based on absorption rates over the past 12 months, there is slightly less than a twelve month supply, generally considered a well balanced market. Ten of 23 key neighborhoods which the company tracks in Naples, Bonita Springs and Estero now have a balanced supply of single family homes with one year or less of available product.

Average and median sales prices have both shown slight increases in the third quarter, indicative of increased activity in the higher price ranges. Properties priced above $1,000,000 have now posted increases in the number of closed sales for the past four quarters, indicating that a recovery is underway in that segment.

Real estate prices and mortgage rates remain at historical lows, offering great purchase opportunities. As more neighborhoods achieve a balance of supply and demand, we will closely monitor the impact this may have on prices.

This report is intended to give the reader a macro-view of the current market in the combined Naples, Bonita Springs, Estero area. Buyers or Sellers who have interest in a particular area or property should consult with Dustin Beard for up-to-date information on those areas.

“Property values will probably never be this low again,” reports Beverly David, a broker associate in Ft. Myers. Looking for a second home or a retirement home, buyers are taking advantage of new listings that come on the market daily. And sellers are pricing their homes to sell. Much of the real estate business in the Naples and Ft. Myers areas is coming from buyers who plan to live here part time or from people who have rented here for years and are now able to buy.

Real estate websites along Florida’s Gulf Coast are seeing a dramatic increase in traffic indicating a new surge of buyer interest. Local brokers are also reporting an increase in inquiries and sales. There are signs in housing markets around the country that the bottom has been reached, sales have increased and hopefully prices will follow.

CNBC asked the real estate search firm Trulia to look at the rebounding markets and tell us the cities that have seen the greatest rise in searches over the last year. Trulia reported that seven of the ten cities were in Florida and five of the cities were on the Gulf Coast side of the state.

From 2007 to 2008 sales in the Ft. Myers and Cape Coral area were up nearly 80 percent. A realtor in Ft. Myers has suggested that the market crashed so hard and prices have fallen so much that people are now becoming interested in buying. Bargain hunters are being lured by prices that have declined 30 to 50 percent or more from the peak of the market.

Coldwell Banker Real Estate reports that first-time buyers and those seeking deals on their retirement homes are entering the market. Federal incentives, which include an $8000 tax credit, will help first-time buyers.

Now, is a great time to buy, interest rates are at historic lows, prices are down and there’s a lot to choose from  with high inventory levels.

February resale activity has shown that Naples-area realtors are having their best season since 2005. According to a monthly report made through the SunshineMLS(multiple listing service) by the Naples Area Board of Realtors(NABOR), closed sales are up 26% and pending sales grew nearly 70%. Realtors report that a lot of people are out there looking AND buying.
The market and the median price of sales is being driven by foreclosures and short sales. In February the median home price was $188,000, a more than 42
percent drop from the $326,000 a year ago. Last year 312 single-family homes and condos were sold in the Naples area and this year 393 units were sold
and 277 of that total went for less than $300,000. Most of the sales have been in North Naples,followed by East Naples.
586 of the 808 pending sales in February are priced under $300,000 and 96 fall in the $300,000 to 500,000 range and 19 are under contract for $2 million-plus.
Higher priced homes are moving even though sales of these homes are lagging behind last years sales. A low interest rate of about 5% is helping to spur sales.
Realtors continue to expect good things in the coming months. In the Naples area, the inventory of homes on the market continues to drop with the rise in sales.
The Marco Island and Ft. Myers areas are also seeing the same trends. 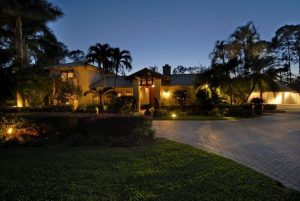 This unique, impeccably maintained, courtyard style home in Pine Ridge was completely remodeled from 2001-2004 and represents the best value for this neighborhood.
The open-air Florida ambiance is reflected in the home’s vaulted ceilings, marble tile floors, plantation shutters and unique, custom built-ins. Tastefully finished in a neutral palette and high quality finishes, the home has a kitchen and family room area with a fireplace and an elegant sunken living room that is both dramatic and distinctive. 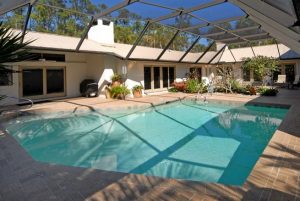 This spacious, 5 bedroom or 4 bedrooms and a den, home has 4 bathrooms. Because of the well-planned layout, one bedroom and bathroom can be used as a guest suite. The master suite is truly a masterpiece that boasts even more extras. It has an amazing exercise room, two walk-in closets, wood floors and a large bathroom with a walk-in shower and a built-in bench. Upstairs, there are two spacious, carpeted bedrooms and a charming bathroom.
The expansive screened courtyard lanai has an exquisite tropical environment featuring a pool, an above ground hot tub and a Koi pond with a waterfall. The tropical foliage continues throughout the serene backyard.
A three car garage and a large brick paver, circular driveway with gate access offer this spectacular estate seclusion and security. This residence also has many hurricane protection extras that further add to its security and uniqueness.

Check out more information at www.DustinBeard.com 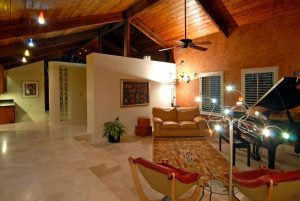 Established in 1984, Imperial Homes of Southwest Florida is one of the area’s most prominent custom home builders. Imperial Homes has earned this reputation by building relationships with their customers based on trust, innovation, quality, and service.

Leading Imperial’s team of professionals is its president, Curtis Gunther. Prior to Curtis’ arrival, he spent 10 successful years with Bechtel, a large engineering and construction company. His exposure to many projects, clients and cultures around the world has helped him develop a management and leadership philosophy that is focused on long-term customer service, controlling costs, meeting schedule commitments, and offering leading edge technology.

You can currently find Imperial building custom homes in each of the following developments along the Paradise Coast: The Colony, Quail West, Il Regalo, Reunion and Mission Inn. For more information on each of these developments, please click on the name. For more information on Imperial Homes of Southwest Florida, and what they can build for you, please visit www.imperialhomesswfla.com.

At around 5 a.m. on Tuesday morning tropical storm Fay came ashore over Cape Romano near Marco Island. Fay’s strongest sustained winds were measured at about 69 mph and stretched up to 125 miles from its center. The storm dropped three to seven inches of rain across Collier County.

Fay continued to travel north-northwest at about 9 mph, leaving thousands of power-outages, downed trees and flooded streets. At one point at least 42,000 Collier residents were without electricity but good progress was made repairing the outages on Tuesday.

There was some isolated flooding in East Naples, Everglades City, Chokoloskee and Immokalee. Marco Island had light flooding and standing water but damage was minimal.

Beach monitors will be checking the county beaches on Wednesday, but at this point the beaches seem to have suffered only minor damage. However, the high tide on Tuesday afternoon was a concern as were sea turtle nests.

Tuesday, the first day of school for Collier County students was cancelled and Wednesday became the start of the 2008-09 school year.

“Life on Vacation: Your little slice of Paradise Coast”

Southwest Florida is often referred to as the Paradise Coast and has become a popular choice for a second home location. The sugary white beaches of Naples, Marco Island and Everglades City are often ranked among the nation’s top 10. Besides enjoying the beaches, fishing and sailing are also popular. Collier County has beautiful protected open spaces, including Big Cypress National Preserve and Everglades National Park.

If golf is your passion then Naples is your vacation paradise. The region has nearly 90 courses, claiming to have more holes per capita than any place in the nation. After a round of golf, you can stroll along Fifth Avenue South and Third Street South. This downtown area is lined with shops, cafes and more than 130 art galleries.

Naples, with its small town character, is still a place where the most elegant home buyer can find something that meets all of their needs. Whether it is a luxury beachfront condominium in Park Shore, Moorings, Bay Colony or Vanderbilt Beach or an exquisite single family home in Pelican Bay, future owners have many building, location and amenity options. For more information on Naples real estate or Paradise Coast real estate, please visit www.DustinBeard.com.

This article can be viewed in its entirety at http://www.usatoday.com/travel/destinations/secondhomes/2008-08-07-naples-fla_N.htm

Enjoy spectacular Venetian Bay views from this lovely, condominium home. An updated kitchen and bathrooms make this unit move-in ready. Just a short stroll to the sugary white sand beaches of the Gulf of Mexico, this is an ideal location. Just minutes from everything Naples has to offer this low rise residence is in one of the Paradise Coast’s premier waterfront neighborhoods, the Moorings. Relax, pull up a chair and take in the glorious sight of boats cruising out to the Gulf, the cool caressing breezes and lush tropical landscaping. Boat docks are available with direct Gulf access.

For more information and photos of this new listing, please visit www.DustinBeard.com.