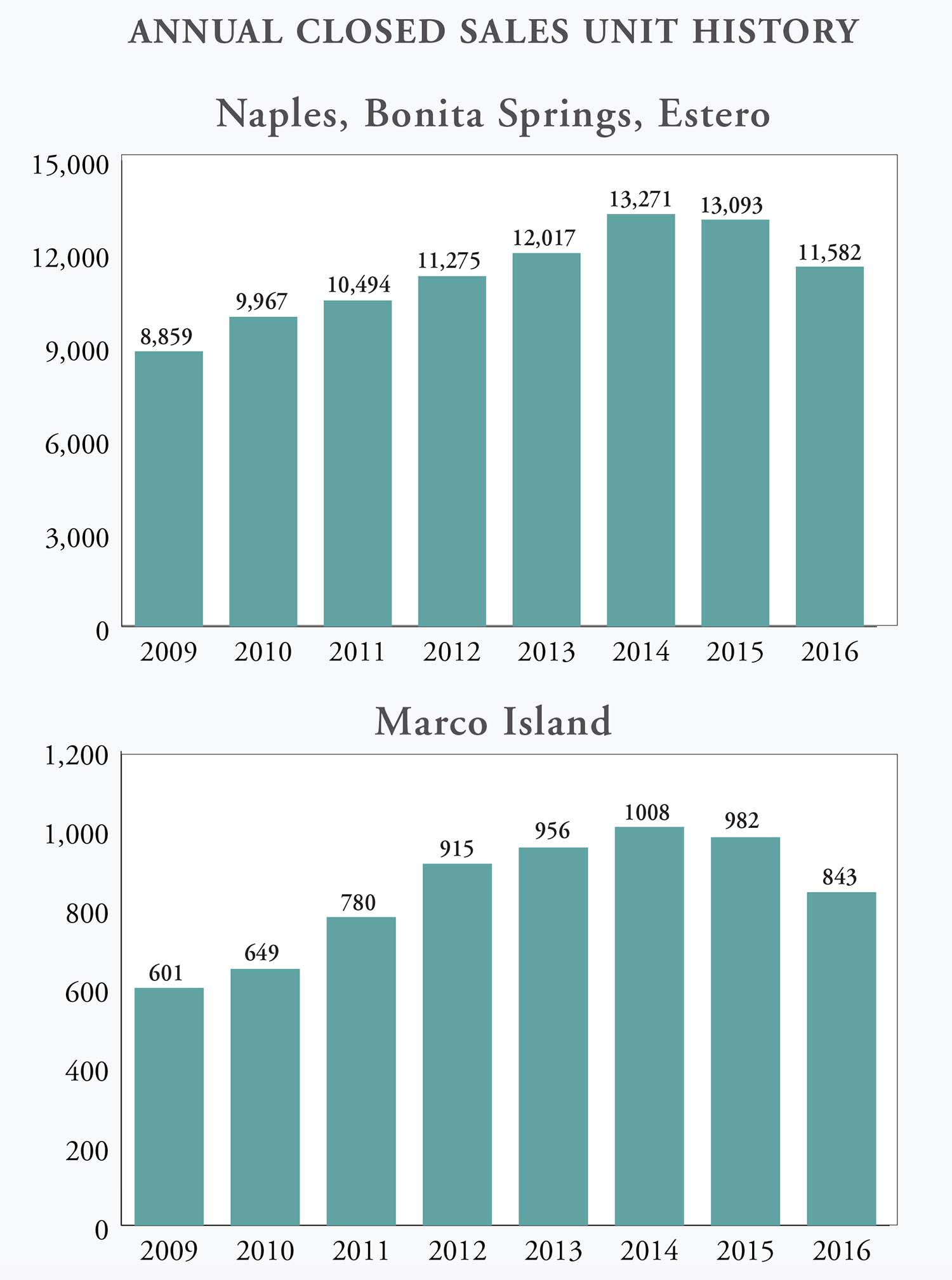 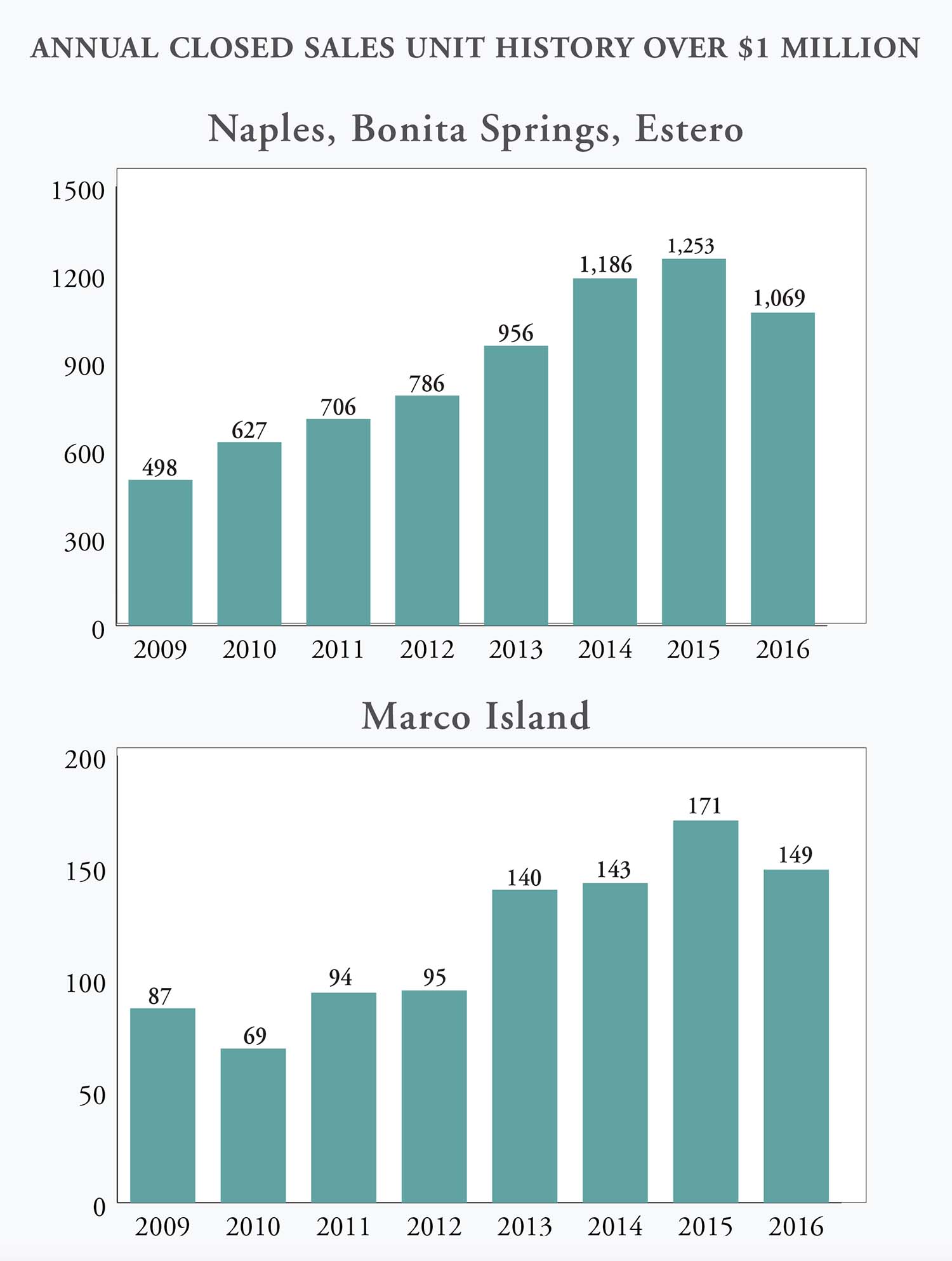 The segment above $5 million decreased 30% year-over-year. 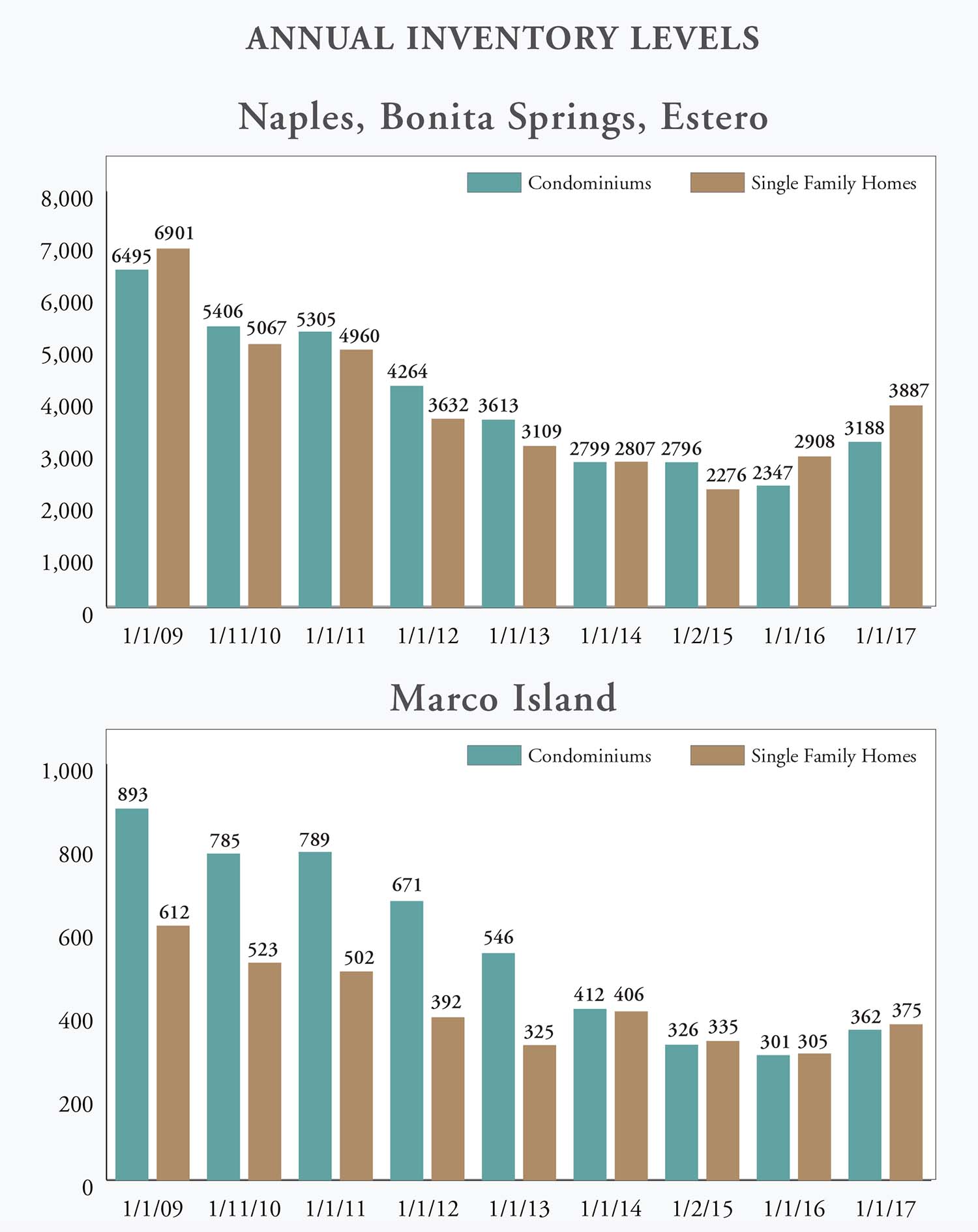 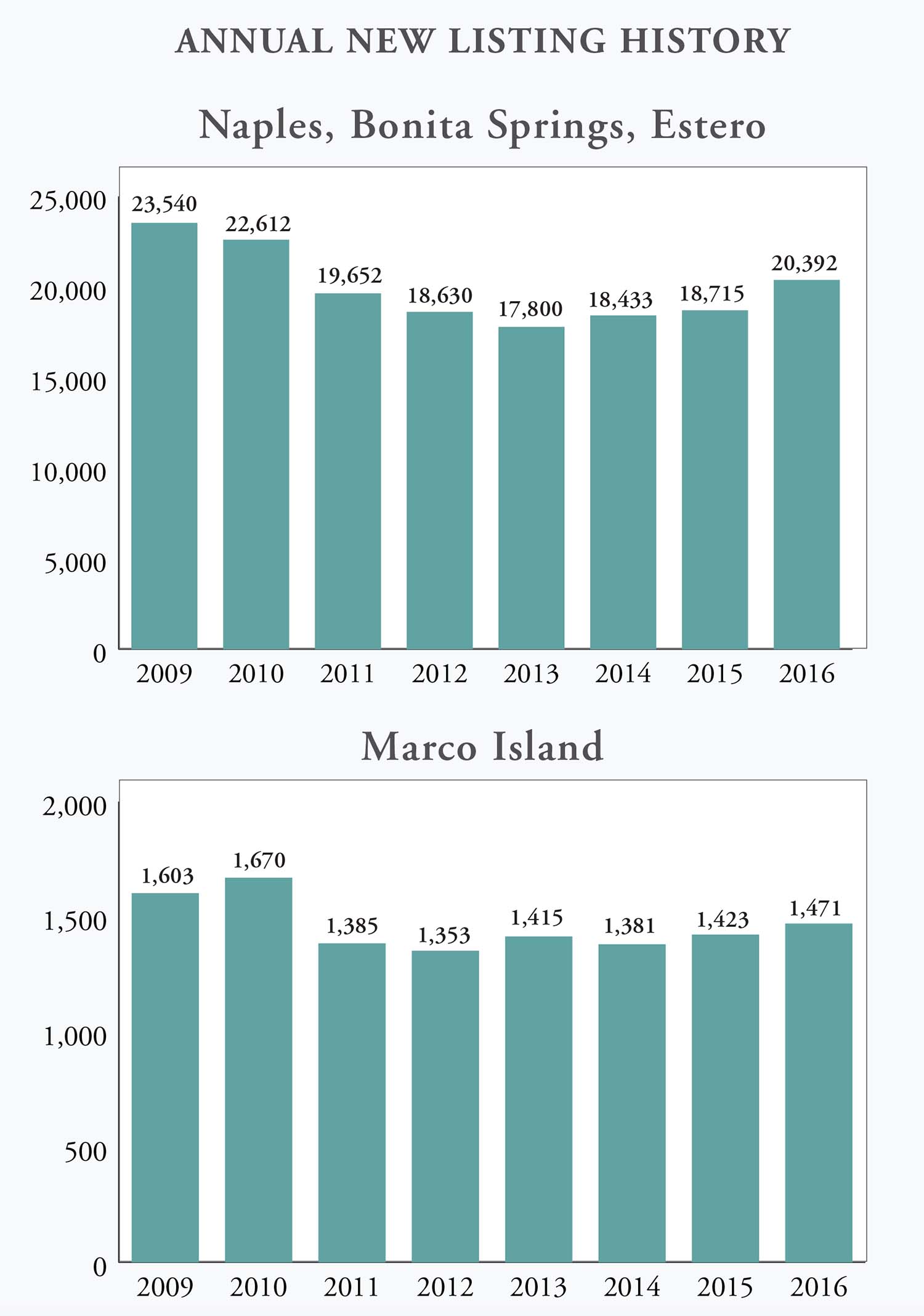 Inventory increased 34.6% in 2016, in the combined Naples, Bonita Springs, Estero market. This is the largest percentage increase in inventory since the depths of the recession in 2008. The supply of condominiums increased 35.8%, while single family homes increased at a rate of 33.6% over the same period last year. It should be noted that John R. Wood Properties does not include manufactured product or time share condominiums in our analysis.

Availability of single family homes and condominiums increased in all price segments, with the largest increase noted in the product segment under $350,000. Product priced between $350,000 and $850,000 had the largest supply of inventory, representing over 40% of the total current inventory and an increase of 22% over the prior year. 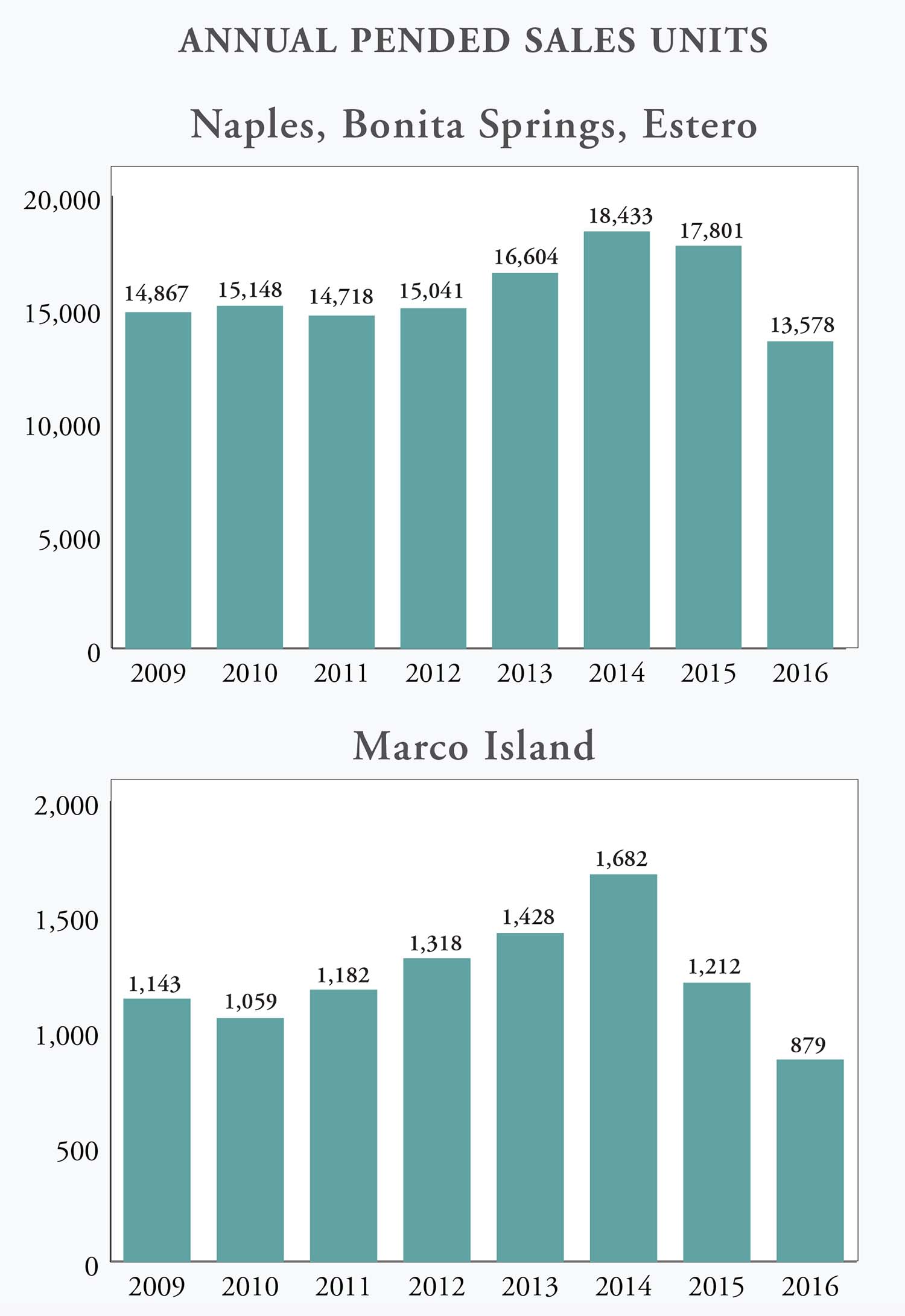 The number of sales pended during the year was 13,578, down 24% from the prior year and the lowest annual total since 2012. All price categories reflected decreases, with properties priced at $350,000 or below showing the smallest decrease, and down only 10% from 2015. It is important to note that not all pended sales close. However, this benchmark along with current inventory has proven to be the best leading indicator of market direction. 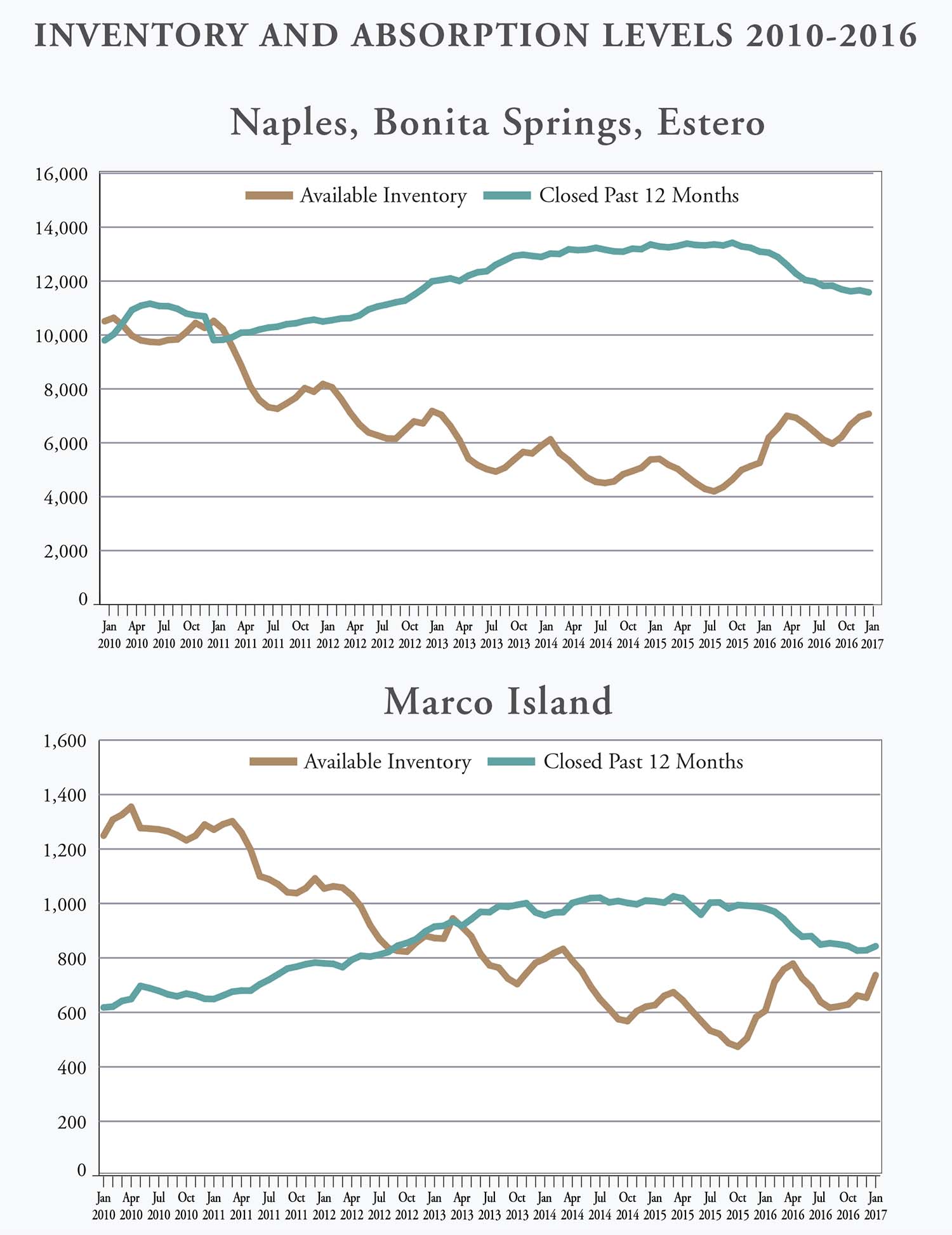 Year-end evidence indicates that market direction has shifted from one that was in balance at the end of 2015, to one that is trending to an oversupply at the end of 2016. Some segments are already well above a one year supply. This market dynamic favors buyers, who now have a greater supply of available options for purchase. This shift is a notice to sellers that pricing strategy must be adjusted to reflect current market conditions.

Marco Island real estate is distinguished by its view and its open water access. The following summary provides insight into the availability and pricing of single family homes and condominiums based on their view. Inventory data by view has been calculated since September 2016.

Condominium inventory with Direct Access has increased by 43% and list prices have dropped 2%. Indirect Access condominiums posted a 26% increase in inventory and a 10% reduction in overall asking price. Beachfront high rise condominiums account for the largest product offering on Marco Island.

Current inventory is 6.8% higher than September 2016 with the current offering price relatively stable, down less than 2%.

The number of sales pended during 2016 was 879, down 27% from 2015 and the lowest annual total since 2008. The Marco Island real estate market is heavily influenced by second home buyers and the reduction in pended sales is a reflection of the overall market softening. It is important to note that not all pended sales close. However, this benchmark along with current inventory has proven to be the best leading indicator of market direction.

The same market dynamics are evident on Marco Island that we see in Naples, Bonita Springs and Estero. The supply of waterfront properties with boating access posted the greatest increase on Marco Island over the past year. Beachfront condominiums, which generally cater to the very seasonal market, have also increased, but not to the same level. Overall, the market favors the buyer and sellers should be aware of this price shift.