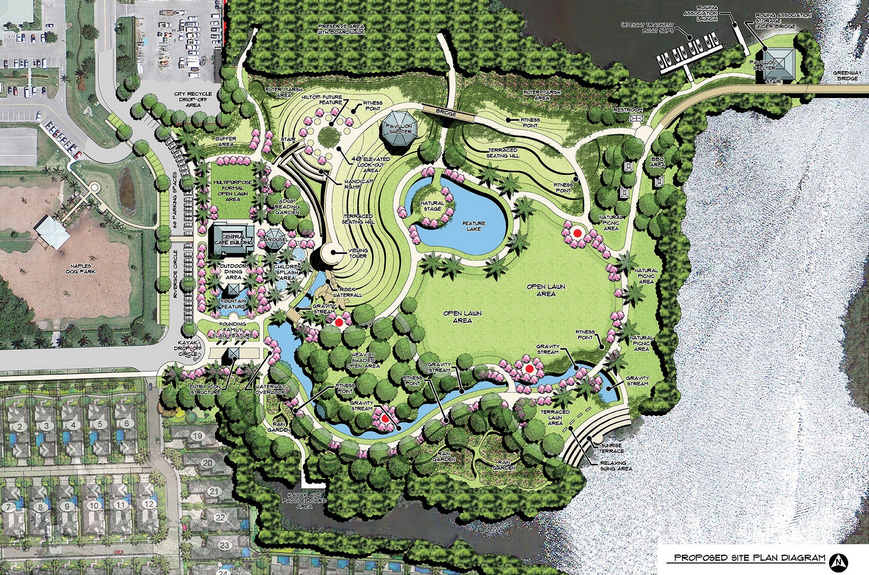 The Gordon River Greenway is set to link to a pedestrian loop as early as September. More than 25 years in the making the Gordon River Greenway will link to an existing pedestrian loop near the Naples Municipal Airport, eventually connecting to a new 15-acre park in downtown Naples.   Once the City builds Baker Park they will attach the greenway to the park with a river spanning pedestrian bridge, possibly completed within two or three years, according to Mayor John Sorey III.  Baker Park will also offer a café, and the old sanitation building will provide public restrooms for those using the park, the dog park and the greenway. Structures including pavilions, picnic shelters and a tiki hut will also be apart of the park.   Baker Park is in walking distance to the new Naples Square development in downtown Naples and will provide a 2-mile walkway.

Visitors will access the greenway and the conservation land from new parking lots on Golden Gate Parkway and south of the zoo as well as from multiple entry points along its route. The 12-foot-wide paved greenway on the river’s east side will dart in and out of red and white mangroves, reveal a rookery for night herons, access elevated boardwalks over wetlands and traipse through pine flatwoods, scrubland and native habitats. Bridges will provide access to the the zoo and conservancy. “Families will be able to spend a day on the river, visit the Conservancy and the Zoo,” says Ms. Ellen Krier, executive director of the Southwest Florida Land Preservation Trust, founded back in 1988 to create and oversee development of the greenway. “People can boat or paddle to the city park, which will have transient boat slips, have an ice cream cone and go back out on the water.”