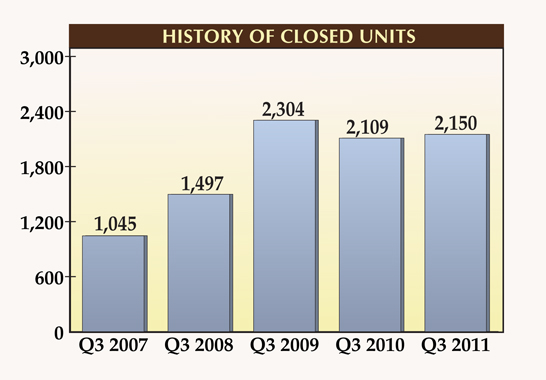 The number of properties placed in inventory in the third quarter continued to decline when compared with the same period in prior years. In fact, it was at its lowest level since Q3, 2004. 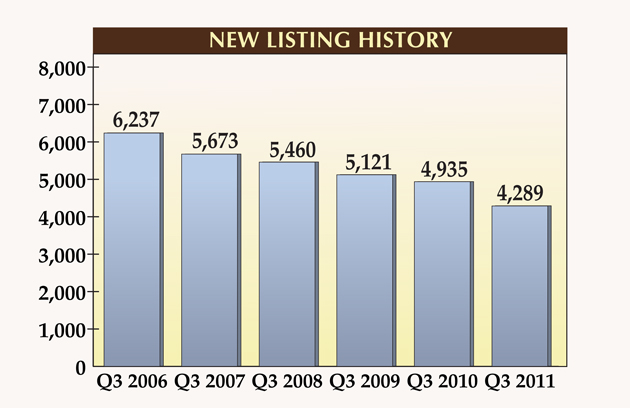 Pended sales remained strong, and third quarter 2011 posted the fourth highest number on record for the quarter. With one pended sale for every 1.6 properties placed on the market, this ratio remains very healthy, and up significantly from 2007 levels when this indicator showed only one sale for each approximately five new listings.

Available inventory is at its lowest level since John R. Wood Realtors began tracking inventory levels in 2007. Third quarter 2011 posted a 24% decline over Q3 2010. When compared to third quarter 2007, the number of units offered for sale has declined by 45%. It is significant that the segment priced below $250,000 declined by 34% since the same period 2010, and now comprises 38% of total inventory – down from 43% a year ago. Diminishing supplies in this entry-level category could be a factor in driving prices in the future.

Average and median sales prices remain approximately constant with the same period 2010, and at historically low levels. In fact, average sales price is consistent with 2001 levels, providing yet another indicator that it is a great time to buy!

Diminishing supplies in all price ranges, historically low prices and mortgage rates, and one of the best locations in the world, point to an active season in the southwest Florida real estate market. The unprecedented market dynamics which currently exist provide astute buyers with a once-in-a-lifetime opportunity, which will probably not be repeated in the foreseeable future.

This report is intended to give the reader a macro-view of the market in the combined Naples, Bonita Springs, Estero area. Buyers or Sellers who have an interest in a particular area or property should consult with Dustin for specific information on those areas or properties.