The number of closed sales in 2010 once again increased over prior year, making it the third consecutive year to show an increase. Properties priced under $250,000 continued to comprise 63% of all closings, as they did in 2009. The most significant change occurred in properties priced above $1,000,000, which increased by almost 27% over 2009. At year end, demand remained strong in all price categories.

Total sales volume for the year increased by 18% over 2009, reflecting the increased activity in the higher price ranges. Median and average sales prices have remained stable throughout the year. 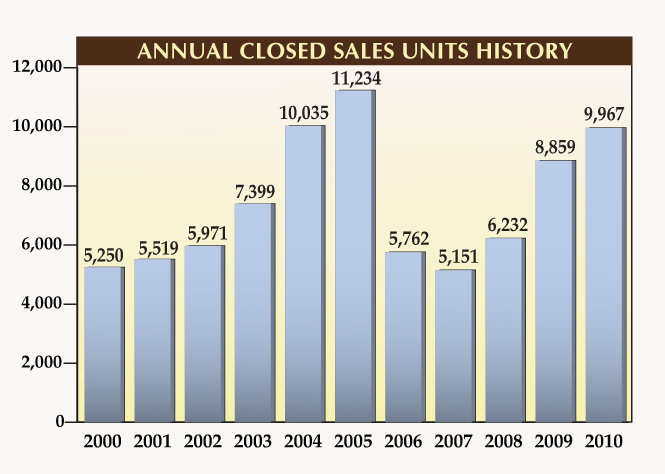 The inventory of available properties is down 35% from the February 2008 high of over 15,000 units. Inventory in southwest Florida is typically highest during first quarter, and diminishes throughout the remainder of the year. On January 1, 2011, there were 10,265 units available in the combined Naples, Bonita Springs, Estero market. Segments and property types showing an  increase in inventory over January 2010 are single family homes and condominiums priced under $250,000 and condominiums priced above $5,000,000. All others show decreases.

New listings placed on the market in 2010 are at their lowest level since 2005. Restricted supply in some segments is already resulting in instances of multiple offers on the same property. 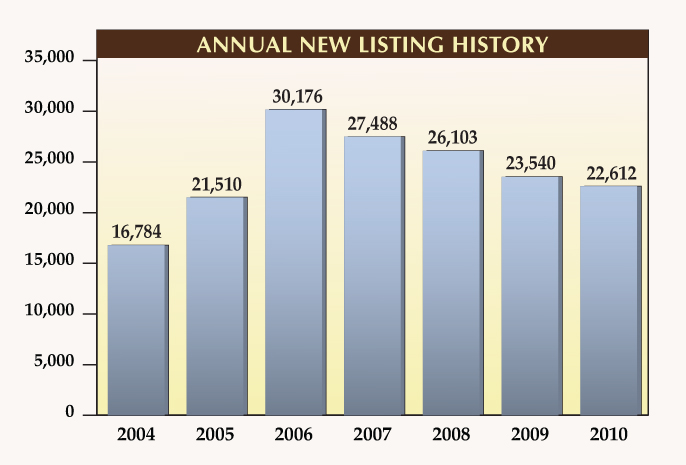 Pended sales, which have been increasing year-over-year since 2008, continued the trend and ended the year with a slight increase over 2009. This represents a dramatic rebound from the record-setting lows of 2006 through 2008, and is comparable to the record highs set in 2004 and 2005.

It is important to note that not all pended sales close. However, this benchmark has proven to be the best leading indicator of market direction. 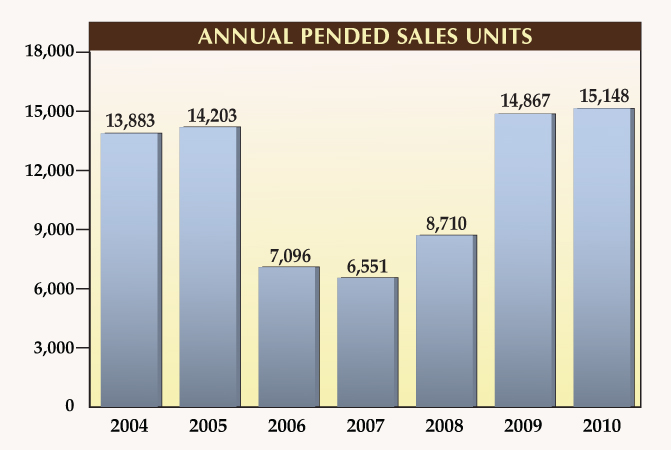 The southwest Florida real estate market continues to stabilize, and increased sales coupled with inventory reductions have resulted in a balanced market at the end of 2010. Based on the number of closings that occurred during the past 12 months, 2011 begins with a one year supply of product. Median sales price has remained essentially constant since early 2009, indicating that we have probably seen the end of significant price reductions in most categories.

Short sales and foreclosures continue to be a significant market dynamic and are expected to remain so in 2011. During 2010, this category represented 40% of closed sales units in the combined Naples, Bonita Springs, Estero market. Approximately 20% of existing inventory is represented by this segment. While short sales and foreclosures appear in all property types and price segments, the price range under $250,000 continues to account for the highest percentage of these properties.

John R. Wood Realtors remains the leader in the southwest Florida market with the highest closed volume of sales of any broker, and over 2,000 closed transaction sides. Our outstanding sales team continues the Company’s 53-year legacy of delivering Legendary Service to all customers.