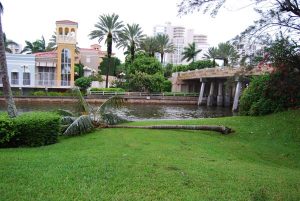 At around 5 a.m. on Tuesday morning tropical storm Fay came ashore over Cape Romano near Marco Island. Fay’s strongest sustained winds were measured at about 69 mph and stretched up to 125 miles from its center. The storm dropped three to seven inches of rain across Collier County.

Fay continued to travel north-northwest at about 9 mph, leaving thousands of power-outages, downed trees and flooded streets. At one point at least 42,000 Collier residents were without electricity but good progress was made repairing the outages on Tuesday.

There was some isolated flooding in East Naples, Everglades City, Chokoloskee and Immokalee. Marco Island had light flooding and standing water but damage was minimal.

Beach monitors will be checking the county beaches on Wednesday, but at this point the beaches seem to have suffered only minor damage. However, the high tide on Tuesday afternoon was a concern as were sea turtle nests.

Tuesday, the first day of school for Collier County students was cancelled and Wednesday became the start of the 2008-09 school year.